Public Welcome, Membership by Invitation Only!

Italy
by papajoad over a year ago

photos
by papajoad over a year ago

From Wikipedia, the free encyclopedia

The 45th Infantry Division was an infantry division of the United States Army. As a major formation of the Oklahoma Army National Guard, it was headquartered in Oklahoma City, Oklahoma for most of its history. The division traces its lineage to the Oklahoma state militia activated in the late 19th century.

The 45th Infantry Division first saw action as a division in World War II fighting in the Mediterranean. Making amphibious landings at Sicily, Salerno, and Anzio, the division played a key role in the liberation of Italy before making a fourth amphibious landing in Europe to liberate France. Eventually, the division advanced into Germany itself.

After a brief deactivation, the division returned to duty in the Korean War on the UN lines against repeated attacks from Chinese forces. Fighting in numerous raids and bigger battles such as the Battle of Old Baldy, the 45th Infantry Division was decorated several times for its actions during both wars. Following its service, the division was deactivated and formed into the 45th Infantry Brigade. 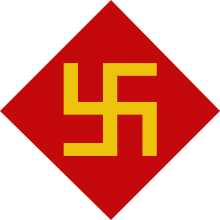 Before the 1930s, the division's symbol was a red square with a yellow left-facing swastika, a tribute to the large Native American population in the south-western United States.

After activation, the division trained at Fort Sill, Camp Barkeley, Fort Devens, Pine Camp and Camp Pickett.[10] The division trained in amphibious assault techniques at Fort Devens in preparation for the invasion of Italy. On 8 June 1943, the division sailed for the Mediterranean region, combat loaded.[11] The 45th Division landed in North Africa on 22 June 1943, and trained at Arzew, French Morocco.[12] By this time, the allies had largely secured the African theater and the decision was made to invade Sicily to the north. For this mission it was assigned to II Corps of the Seventh United States Army.[13] The invasion would place 180,000 allied troops on the island, against 230,000 mostly weak Italian troops and two reconstituted German divisions.[14]

On 10 July, the division was one of the leading units in the amphibious assault on Sicily.[15][16] The division landed near Scoglitti, the southernmost U.S. objective on the island and advanced north on the U.S. force's eastern flank.[17] After initially encountering resistance from armor of the German Herman Goering Division, the division advanced, supported by paratroopers of the 82nd Airborne Division landing inland on 11 July.[18] The 82nd paratroopers, conducting the first combat jump of the war, then set up to protect the 45th's flank against German counterattack, but without weapons to counter heavy armor, the paratroopers had to rely on support from U.S. Armor units to repulse the German Tiger tanks.[18] German forces pushed back, the division advanced, its main objective was to capture airfields at Biscari and Comiso.[19] for most of the first two weeks while the division moved slowly north, it encountered only light resistance from Italian forces fighting delaying actions.[20] The enemy resisted fiercely at Motta Hill on 26 July, and the 45th Infantry Division fought for four days to defeat Italian and German forces.[21] The division was one of the units involved in Patton's race to Messina, and he personally ordered the division to make for the city as quickly as possible.[22] On 1 August, the division withdrew from the front line for rest and rear-guard patrol duty.[12] The division was assigned to VI Corps of the Fifth United States Army, in preparation for the invasion of mainland Italy.[23]

On 3 September, Italy surrendered to the Allied powers. Hoping to occupy as much of the country as possible before the German army could react, the Fifth Army prepared to attack Salerno.[24] On 10 September 1943, the division conducted its second landing at Agropoli and Paestum with the 36th Infantry Division, on the southernmost beaches of the attack.[23] Opposing them were elements of the German 29th Panzergrenadier Division and XVI Panzer Corps.[23] Against stiff resistance, the 45th pushed to the Calore River after a week of heavy fighting.[25] The Fifth Army was battered and pushed back by German forces until 20 September, when American forces were finally able to break out and establish a more secure beachhead.[23][26] On 3 November it crossed the Volturno River and took Venafro.[25] The division had great difficulty moving across the rivers and through mountainous terrain, and the advance was slow. After linking up with the British Eighth Army that had advanced from the south, the combined force, under the Fifteenth Army Group was stalled when coming on the Gustav Line.[27] Until 9 January 1944, the division inched forward into the mountains reaching St. Elia, north of Cassino, before moving to a rest area.[25]

Allied forces conducted a frontal assault on the Gustav Line stronghold at Monte Cassino, and VI Corps was assigned Operation Shingle, detached from the Army Group to land behind enemy lines at Anzio.[28] For this mission, the 45th Infantry Division was given additional Armor units.[29] The VI Corps landed on schedule, surprising German forces, however General Mark Clark's decision to consolidate the beachhead instead of attack gave the Germans time to bring the LXXVI Panzer Corps to oppose the landings.[28][30] On 30 January 1944, when VI Corps moved out, it encountered heavy resistance from German armored units which inflicted heavy casualties.[28][31] The fight became a war of attrition, and for the next four months the division stood its ground during repeated German counterattacks.[25] The 45th Infantry Division was mostly stuck in its place as the Pimlott Line was subjected to bombardment from aircraft and artillery fire. It was May before the Germans, reeling from heavy bombing and repeated attack from the Fifteenth Army Group, began to withdraw.[32] On 23 May the division went on the offensive, crossing the Tiber River by 4 June and, in the process, outflanked Rome. VI Corps linked up with the rest of the Fifth Army by 25 May, and, as the division crossed the river, the Fifth Army entered and captured Rome.[33] As a result, the 45th Infantry was the first military unit to enter the Vatican. On 16 June, it withdrew for rest in preparation for another assault.[25] During this time, VI Corps was attached to the Seventh United States Army, Sixth United States Army Group,[34] part of a buildup in preparation for an invasion of mainland Europe in southern France, called Operation Anvil, which was to coincide with Operation Overlord in the north.[35] The 45th Infantry Division, along with the 36th and 3rd Infantry Divisions were pulled from the line in Italy to conduct Operation Anvil, however the attack was delayed until August due to a shortage of landing craft.[35] 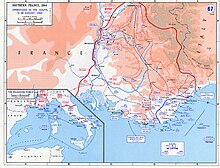 The 45th Infantry Division participated in its fourth assault landing during Operation Dragoon on 15 August 1944, at St. Maxime, in Southern France.[25] The German Army, reeling from the Battle of Normandy pulled back after a short fight, part of an overall German withdrawal to the east following the landings.[36] Soldiers of the 45th Infantry Division engaged the dispersed forces of German Army Group G, suffering very few casualties.[33] The Seventh Army, along with Free French forces, were able to advance north quickly. By 12 September, the Seventh Army linked up with the Third United States Army, advancing from Normandy, joining the two forces at Dijon.[35] Against slight opposition, it spearheaded the drive for the Belfort Gap. The 45th Infantry Division took the strongly defended city of Epinal on 24 September.[25] The division was then reassigned to V Corps for its next advance.[34] On 30 September the division crossed the Moselle River and entered the western foothills of the Vosges, taking Rambervillers.[25] It would remain in the area for a month waiting for other units to catch up before crossing the Mortagne River on 23 October.[25] The division remained on the line with the Sixth United States Army Group, the southernmost of three Army Groups advancing through France.[37]

After the crossing was complete, the division was relieved from V Corps and assigned to XV Corps.[34] The division was allowed a one-month rest, resuming its advance on 25 November, attacking the forts north of Mutzig (forts Kaiser Wilhelm II designed in 1893 to block access to the plain of Alsace) and crossed the Zintzel River and pushed through the Maginot defenses.[25] During this time much of the division's artillery assets were attached to the 44th Infantry Division to provide additional support.[38] The 45th Infantry Division was reassigned to VI Corps on New Year's Day.[34] From 2 January 1945, the division fought defensively along the German border, withdrawing to the Moder River.[25] It sent half of its artillery to support the 70th Infantry Division.[38] On 17 February the division was pulled off the line for rest and training. Once this rest period was complete, the division was assigned to XV Corps for the final push into German territory.[34] The 45th moved north to the Sarreguemines area and smashed through the Siegfried Line, on 17 March taking Homburg on the 21st and crossing the Rhine between Worms and Hamm on the 26th.[25] The advance continued, with Aschaffenburg falling on 3 April, and Nuremberg on the 20th.[25] The division crossed the Danube River on 27 April, and liberated 32,000 captives of the Dachau concentration camp on 29 April 1945.[25] The division captured Munich during the next two days, occupying the city until V-E Day and the surrender of Germany.[39] During the next month, the division remained in Munich and set up collection points and camps for the massive numbers of surrendering troops of the German armies. The number of POWs taken by the 45th Division, during its almost two years of fighting, totalled 124,840 men.[25] The division was then slated to move to the Pacific theater of operations in order to participate in the invasion of mainland Japan on the island of Honshu, but these plans were scrubbed before the division could depart due to the surrender of Japan, V-J Day.[40]

Oops! This site has expired.

If you are the site owner, please renew your premium subscription or contact support.